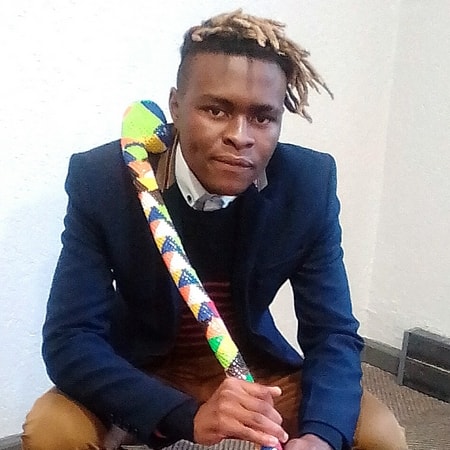 SSP Alum Giggs Kgole (St. Johns College, Class of 2015) is only 21 and has just launched his own art gallery in inner city, Johannesburg. His goal is to become Africa’s Number 1 artist by the age of 30!

Despite battling dyslexia at school, Giggs was really good at art and when he joined St. John’s, “It exposed me to the arts.” In Grade 10, he was part of an exchange programme to go to Scotland, it fired his passion for art.

His father had to tell him that he couldn’t afford to pay for Giggs to go to university – “He told me to either apply for scholarships and get funding, or go back to the village in Limpopo.” Giggs broached the topic of a gap year and at the beginning of 2016, and was called in for an interview by acclaimed artist William Kentridge.

“He hired me instantly – I thought, ‘This is fate and I have chosen the right guy to pick as my mentor – someone who is not only famous in South Africa but also in the world.” Giggs worked 24/7 when called upon and used the opportunity to learn the ropes about the business and promotional side.

After six months, he had the choice of studying further in Scotland or Rome and quit his job, Giggs invested his money into art materials and went from gallery to gallery, but was told to go away. Instead he took to social media and online platforms to promote his art and to tell Africa’s untold stories.

After holding a successful exhibition, he faced an ethical quandary for his second show and was inspired by his mentors Nelson Makamo and Ayanda Mabalu who said, “You need to remember, you cannot have a gallery without an artist, but you can have an artist without a gallery.” Giggs then went to galleries and managed to speak to Mark Read of Everard Read Gallery who immediately gave him a solo show where he sold his works to help fund outstanding costs to go to university in Rome.

With help from the Ontong family from St. Johns and the proceeds of his art, Giggs raised the funds needed for John Cavott University. It was in Rome that he met multimedia artist and short filmmaker Oscar Noriega and during the holidays, they decided to come to South Africa on holiday.

It was then that they decided to open an art gallery. “We had a dream and a vision of this great space for artists to use – that’s GasLampZA – a space for young guys like us.” As soon as the estate agent opened the door, Giggs said, “This is the space!” The duo have lined up events for the rest of the year.

Asked for advice for fellow entrepreneurs, Giggs says, “As much as I fail, failing is ok – as long as you carry on.”