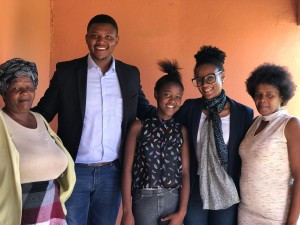 SSP Executive Director, Nozizwe Vundla and Recruitment and Academic Director, Lucky Letshabo travelled to the Eastern Cape to meet an extraordinary child this past October – Anoyolo Lose.  Anoyolo’s primary school in Qomfo village – an hour outside of King William’s Town – has a mere 21 children; and she teaches the Grade 1’s when she finishes her Grade 7 classes! They were joined by SSP SPO Sheri-Ann van Dyk, who had already met Anoyolo during the organisation’s recruitment process in that province.

Because of how dynamic and busy SSP is, as staff members, we seldom sit back and appreciate the outcomes of our efforts and the wonderful work we do. All our potential scholars go through extreme sacrifices to get onto our books.

The scholars go through:

This is an intense 10-month process for any potential candidate, but more so for the extraordinary young lady in question, due to the remoteness of her village.

When Anayolo (Xhosa for ‘they are joyful’) qualified for our Programme and received the SSP scholarship, from our perspective at the time, there was nothing out of the ordinary. That was until we did a background check on her, as we do with all our scholars.

The first odd thing is that her primary school didn’t exist, well – according to Google, that is.

Anayolo is from a tiny village called Qomfo, some 100km outside of King Williams’s Town. It is so isolated, that even the traffic police that we asked for directions, did not know of it. Her primary school has a total of 21 scholars, from Grade 1 to 7. She is one of two Grade 7s. The staff complement consists of a principal and two other teachers. When we asked how teaching gets done, she casually replied; “I teach the Grade 1s when I finish my work.” We were flabbergasted.

Anayolo lives a stone’s throw away from her primary school with her maternal aunt and her makhulu, both of whom are unemployed. When asked how they found about SSP and the scholarships we offer, it turns out her aunt saw an advert and application forms in the King William’s Town library, which had been dropped off there by SSP Eastern Cape SPO, Sheri-Ann van Dyk.

Her aunt explained the difficulty of their travels to and from East London for the different testing phases, using public transport, and even having to hire private transportation. She said it was all worth it and they were more than happy to make the sacrifices. We asked Anayolo what her reaction was when she found out that she’d been awarded a full scholarship. “I was excited but nervous. I was excited about the scholarship, but nervous about living away from home.” She also said that she was keen to make new friends.

We were so impressed by this bright, young lady, who says she wants to become a doctor. Her poise, eloquence, confidence and maturity were striking. What was even more surprising – was learning that Anayolo was a year younger than her peers, which is remarkable considering how well she did in all the different tests. This speaks to her maturity.

Anayolo will be going to SSP Partner School Clarendon High School for Girls, as a boarder. The school had better watch out because there’s a bright star headed their way.

It was an extraordinary day in the office that filled us with a great sense of pride and positive optimism for the future of this country.

Anayolo is the personification of SSP, she is the reason that our organisation exists, and it is encouraging to see that we are reaching those that are deserving of our scholarships even in the furthest reaches of South Africa